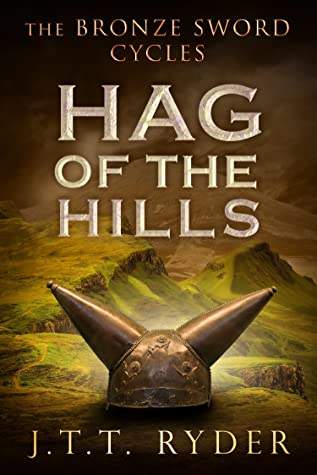 Categories: 2022, Book Discussions, Book Reviews, Fantasy, Historical Fiction, Mystery Thriller
Tags: #adultfantasy, blogotur, Fantasy, hagofthehills, thewritereads
Author: J T T Ryder
Genres: Fantasy, Historical Fiction, Science fiction/Fanatsy
Series: The Bronze Sword Cycles
Publisher: Old World Heroism
“Nothing is unconquerable; even our gods can die.” Brennus is destined from birth to become a warrior, despite his farmer’s life. But when the Hillmen kill his family and annihilate his clan, he now has the opportunity to avenge those who he loved. Brennus must survive endless hordes of invading Hillmen and magic-wielding sidhe, aided by only a band of shifty mercenaries, and an ancient bronze sword. Failure means his family and clan go unavenged.… 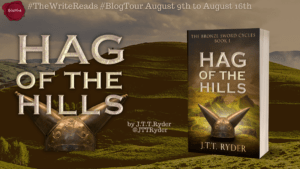 In my review of Persuasion by Jane Austen, I talked about the folklore style of narration. Wherein Persuasion was a classic, here the style works well for a prehistoric fantasy. The first-person narrative by Brennus gives us a deeper insight into his thoughts and worldview. It makes us part of the story as we, too, are listening along with the bard.
It took me a minute to figure out the characters and settings. Once I was in, however, I was engaged and wanted to know more. The pacing of the story was even and almost never slowed down. The ending surprised me a bit, but it made sense with the overall theme of the story.

The entire story revolves around Brennus, since he is the narrator. Brennus is just a member of a clan caught in a situation that gets beyond his control. However, he cannot help but carry the guilt of possibly being the origin of the chaos around him.
The ensemble characters were mostly well-rounded with an arc for themselves except for Myrnna. As a reader, it is hard to empathise with the fate of a character that you barely got to know. Myrnna barely voices her opinion, save on a few occasions. Perhaps it is hard to give her perspective with a first-person narrative. It limited her role as a plot device and quite an important one, for that matter, with no agency.

For someone who has no idea about Celtic history, this was quite the fast-paced and adventurous fantasy tale. Hag of the Hills surely has a lot to unpack. It keeps you hooked throughout and would require a re-read to fully grasp the story.

Joseph Thomas Thor Ryder is an archaeologist and author of the heroic fantasy novel HAG OF THE HILLS, book 1 of THE BRONZE SWORD CYCLES duology. He is a published author of Viking archaeology, and a doctoral candidate specializing in the Viking Age and Celtic Iron Age. He resides in Norway where he conducts archaeological research and writes heroic fantasy set in historical periods.