Death At the Manor | By Katharine Schellman 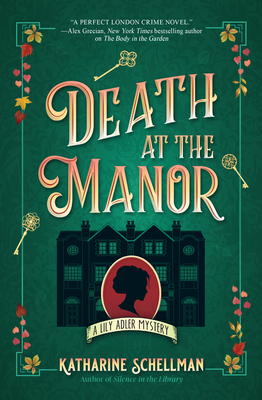 Categories: 2022, Book Discussions
Tags: deathatthemanor, historicalfiction, lilyadlermystery, mysterythriller, netgalley
Author: Katharine Schellman
Genres: Crime Thriller, Historical Fiction, Mystery thriller
Series: Lily Adler Mystery
Publisher: Crooked Lane Books
Regency widow Lily Adler is looking forward to spending the autumn away from the social whirl of London society. When she arrives in Hampshire with her friends, Lord and Lady Carroway, she doesn’t expect much more than a quiet country visit and the chance to spend time with her charming new acquaintance, Matthew Spencer.But something odd is afoot in the small country village. A ghost has taken up residence in the Belleford manor, a lady…

Set in the regency era, the theme of Death At the Manor is quite in line with modern sensibilities. But it does not feel out of place in the story. Even though I am not familiar with the previous two Lily Adler mysteries, I was quickly able to grasp the dynamics between the recurring characters.

The plot was simple and suspenseful enough. But it never quite created an urgency to know the identity of the suspect. The book took its time to move forward. If not for the gothic nature of the story, the first half would have been too slow for a thriller. However, towards the finale, it picks up the pace and quite dramatically reaches the end.

Since the book is set in an era where the idea of a female detective wasn’t plausible, Lily had to be a naturally inquisitive person to dig so deep into other people’s lives. A simple, true crime podcast host could have solved that problem in a contemporary setup, but this is a different era. Perhaps the previous books would throw light on how she became the person she was here. But, without the context, both Lily and Ofelia’s interference is a bit much.

The ensemble cast is perhaps the best feature of the book. Each one of them stayed distinct and served their purpose in moving the story forward.

As far as the ending goes, if you were paying close attention, you could see it coming. Still, the tension builds during the last half and that urgency to find out the murderer finally presents itself.

Overall, this was a spooky gothic thriller that you could consume in a single afternoon. For that, you need to stick to the end until the story picks up.