The Selah Branch | By Ted Neill

The Selah Branch | By Ted Neill 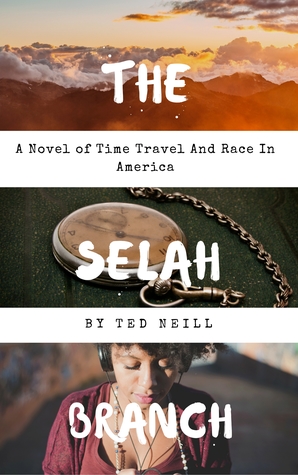 Categories: Book Discussions, Science-fiction
Tags: racial discrimination, selah station, time travel
Author: Ted Neill
Genre: Science fiction/Fanatsy
Publisher: Tenebray Press
The Selah branch is the story of Kenia Dezy who reaches the rural town of West Virginia, Selah Station as a part of her pre-med practicum. Kenia begins to have strange and brief episodes which take her to some strange place that she cannot comprehend. How she deals with this time-travel episode and the secrets she unravels along with it leads to an engrossing read.

Ted Neill is an educator, health professional, and journalist who has worked in various parts of the world. Most of his works address social, political and religious issues. From what I understand by reading The Selah branch is that Ted Neill is not someone who shies away from stating hard facts or even attempts to sugar coats it. That takes a lot of courage. The fact that the last page of the Selah branch mentions that the purchase of the book will be utilized to support nonprofit organisations working for the betterment of communities of colour and opportunities for children and families from traditionally marginalized communities says enough about the author. You are not just buying a book, you are contributing for something as well.

I received this book in exchange for an honest review. The Selah branch is the story of Kenia Dezy who reaches the rural town of West Virginia, Selah Station as a part of her pre-med practicum. Kenia is a young woman whose heart is full of trepidation regarding the grave injustice that had happened to the people of her kind over the centuries even though she is an otherwise confident, well-read and successful person. With her reluctant acceptance of the practicum, Kenia begins to have strange and brief episodes which take her to some strange place that she cannot comprehend. How she deals with this time-travel episode and the secrets she unravels along with it leads to an engrossing read.

Disclaimer : Before we begin, let me clarify something. As someone who was brought up in a country where there is no discrimination based on colour if any of my remarks come out us hurting any kind of cultural sentiments I apologise and clarify that it is not intentional.

Now to the book, right from the start, I was curious as to what I might find because the synopsis looked so intriguing. Now I am not someone who is familiar with American history. The information I have about this is what we get from the media, the encounters and work of Mahatma Gandhi in South Africa and books like To Kill a Mockingbird and The Selah branch itself.

However what separates this one from the rest is the mention of current events throughout. The Charlottesville incident, the current American scenario when you read all these you realise that isn’t just some fiction here. The conflict here is real. The struggle is quite in the present and real more than anything else. As I mentioned earlier, I might not have experienced the discrimination based on colour but living in a country which claims to have unity among diversity including a thousand cultures, languages, and practices the concept of the discrimination is not alien to me. That is how I find the common ground here and the story becomes relatable to me.

The book was engaging throughout barring a few initial chapters. The initial ones even though were eventful moved at a slow pace. Often it felt like a social commentary based on the current political scenario in America than a character’s own thoughts. Even though Kenia is a socially aware person, not all of us keep recollecting the social statistics in our head every now and then. When she does that frequently, it distracts you from the plot. However, the point when Kenia got her internship, things took an interesting turn. From there on it was a compelling read except for a few statistics recollection parts now and then. Not the kind that would keep you on the edge of your seat but one that slowly builds up its pace taking it’s time to develop and spread its wings as an engaging tale.

Kenia’s time jumps are not a surprise to anyone who read the synopsis. Despite that, the story took a long time to create a suspense around that. When you know what it is and the character you follow has no idea about it there is only a limited amount of time the mystery keeps you hooked. However the book waited a long time for that reveal. Or maybe it’s just me.

Time travel is definitely a topic of interest for anyone. As a physics graduate I enjoyed the Schrodinger cat and other wave motion theories discussed here and there. However, if you are not a physics enthusiast, it might tire you out a bit.

The story came around a full circle in its own way which I liked. Except for Kenia the other characters didn’t have much of an arc. But the contrast of the two realities substitutes it nicely. It took care of the little things mentioned here and there and brings it back asserting it’s importance. Stuff like that rewards a focused reader.

Overall Selah branch embodies the concept of time travel for righting the wrongs on the surface. But beneath that lies an even important message, that is if you don’t have the chance to rewrite your past what you could do is not rewrite the same mistakes in your present and learn from it. This is emphasised in the last line of the book.

There is so much work to be done.

The Selah Branch: A Novel of Time Travel and Race in America by Ted Neill
My rating: 4 of 5 stars

Get your book here : Barnes & Noble