You’ll be the Death of Me | By Karen M McManus 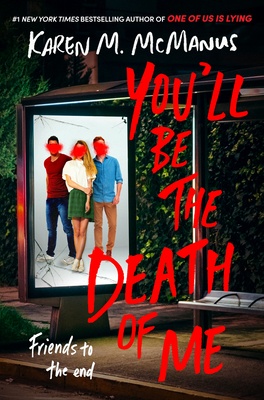 Categories: 2021, Book Discussions, Book Reviews, Crime Thriller, Mystery Thriller, YA thriller
Tags: #crimethriller, #YAthriller, mysterythriller
Author: Karen M McManus
Genres: Crime Thriller, Mystery thriller, YA thriller
Publisher: Penguin
Ivy, Mateo, and Cal used to be close. Now all they have in common is Carlton High and the beginning of a very bad day. Type A Ivy lost a student council election to the class clown, and now she has to face the school, humiliated. Heartthrob Mateo is burned out--he's been working two jobs since his family's business failed. And outsider Cal just got stood up.... again. So when Cal pulls into campus late… 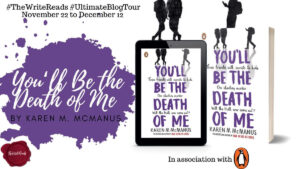 One of the good things about multiple perspectives is that it gives you a better idea about your main characters. Not just what they think of themselves but how others view them. This is why the narrative from the main characters’ point of view gave them a much better three-dimensional persona.

The plot is evenly paced. I like that thrillers dwell enough on the emotional aspect and keep the clues moving at the same. The story managed to strike that balance throughout. My only problem would be – which is quite common with any YA thrillers- is the absent and clueless adults in the picture.

The friendship dynamics between Mateo, Cal and Ivy was quite compelling. The three clearly shared history and the curiosity keeps you hooked as you dive deeper into the book. Each character had an arc which is definitely great character development. It didn’t end up getting back to normal after such a hardcore day. But it brought a lot of things buried within the characters out and had them reflect on it if or when they reach the other side of the chaos.

The conflict is one of the fundamental things that had me interested in the book. It is quite the opposite end of the classic “I miss school for one day and suddenly the president visit happens, kids are given free candies and the math teacher doesn’t show up for that test”. In other words, the opposite of FOMO. That’s the hook that makes you want to know how things are going to end up for the three main characters.
The ensemble characters made it a wholesome mystery thriller. The whole social media viral thing was dealt with cleverly.

Overall, You’ll be the Death of Me is a cosy YA mystery thriller that you can curl up with and finish in a weekend. It is packed with twists and turns and dark secrets that you can devour like Sugar Babies.