Book Review | Faith and the Beloved | By Kochery C Shibu 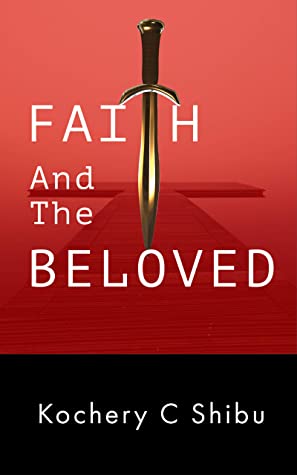 Categories: 2020, Book Discussions, Crime Thriller, Thriller
Tags: #crimethriller, bookreview, faithandthebeloved
Author: Kochery C Shibu
Genre: Crime Thriller
Naithy Cherokil is a rich and successful business woman from Mumbai who marries the young and handsome model Tony D’Souza after the death of her husband. Little does she know that the ideal sex slave of her husband is the sleeper cell of a terror outfit. Events in her life take unforeseen turns as the male Mata Hari is activated. Prem Rollands is a kalari exponent and brilliant student whose world revolves around his brother…

Faith and Beloved is told from multiple povs. The narrative and pacing is what kept the story moving forward. The latter half of the story felt like a repetition of the same events. It was of course from different perspectives. Each version was based on the character’s involvement and knowledge.  Still, after a point, it was basically the same questions getting repeated, the answer to which has already been revealed to the reader.

The plot is intricately woven to serve the purpose of a wholesome thriller. The events were all tied up nicely towards the end. Considering the fact that there are so many characters and overlapping story lines, the plot was clear and didn’t leave much room for confusion. I read a finishing copy but there were many grammatical as well as typing errors which took me out of the story instantly.

None of the characters in this book were exactly likable. Most of them have  a tipping moral compass that veered towards evil. It has to be assumed that the comparatively innocent character is your protagonist.

For a book with Beloved in the title, the book had a significant  amount of rape scenes. If this is a trigger warning for you please stop reading about the book now. This is NOT for you.

Most of the significant female characters are raped in the book at some point. Of course, this is the story of shady underworld and sleeper cells. It is understandable that the book involves objectification of women and use them as mere pawns. It doesn’t matter that the story calls out itself.

What threw me off was the way, each rape scene was described. It felt as if in the end, the woman enjoyed the process.

Just like the previous book from the author, I really had an issue with the way women were portrayed in the book. No matter how strong and confident they were in the end, they’re all sex craving animals who deserve to be abused. The casual use of rape repeatedly and how seemingly unaffected both the man and woman were by the incident just threw me off reminding me that it was only fiction.

This was a one time read for me. The constant mention of simultaneous political events in the story and the spotlight on the Sri Lankan civil war are the few noteworthy points in the book. The plot was definitely strong but the characters were just too twisted and remorseless.