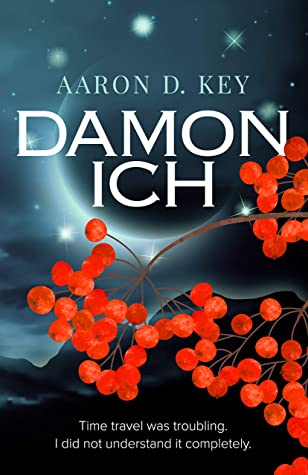 Categories: 2021, Book Discussions, Book Reviews, Fantasy
Tags: #adultfantasy, aarondkey, bookreview, booktasters, contemporaryfantasy, Fantasy
Author: Aaron D Key
Genres: Fantasy, Science fiction/Fanatsy
Series: The Wheel of Eight
Damon Ich, an introverted and lonely workaholic, lives in a paradise with power to do anything, and to go anywhere, at any time. He uses this gift to help people in need. One night, he rescues a man who is revealed to be the founder of his way of life - and suggests a rescue mission he can't refuse. The meeting and the rescue set off a train of events that shatter everything. Damon Ich…

Damon Ich is the second book in the Wheel o Eight series. Like the first book Herai, here the story is named after the main character Damon Ich. The book states in the beginning that humanity isn’t supposed to experience time in a non-linear way and I couldn’t agree more. Even a story that goes non-linear aggravates me as a reader.

The narrator himself is a lonely man and some of the monotony spills into the story as well. His life is a series of events trying to right the wrongs in the past and set things right for the future , never really living in the present. It is what the ruthless and definite nature of time gives us, one might think. The involuntary requirement of being in the present. Otherwise, we would all be scrambling back to our lives before 2020. Personally, I have spent a great deal of time on myself to grow last year and would never want to go back in time.

Anyway, this review is not about me. It is about Damon Ich and the story of his life. The plot thickens as we read along. It had me confused for the most part. The story demands your utmost attention and memory from the very start to the end. And if you falter, it will leave you on a ledge.

Despite, the story being entirely told by Damon Ich we get to see the familiar characters back including a few new ones. Damon Ich, even with all the access to power, was indeed a flawed being with so much innocence and open mindedness. Which is why he was the perfect narrator of the story.

I wouldn’t have minded getting a little bit of Elena’s perspective. Although part of the charm was her enigmatic nature. As for conflict, I am never a fan of using a coincidence or any plot device as an excuse to resolve the plot. With the dramatic ending in Herai, I had expected a bomb to drop.

Of course the events went haywire halfway through the book and yet the ending left me wanting for more.

Damon Ich, stands the test of time in the most outrageous way possible. The story is a cautionary tale reminding us that we are but servants of time whether it is constant or not. The religious symbolism and the analogies to the mystical beings is hard to miss. It tries to make a certain kind of rational sense to the myths in a way. It is worth a go if you’re willing to devote all your attention and time to the book.