Today we are going to take a look at Princess Ever After by Connie Glynn. This spotlight is a part of TheWriteReads ultimate blog tour in association with Penguin.

Princess Ever After is a YA Fantasy and the fifth and final book in the Rosewood Chronicles. I have always been a fan of the Princess Diaries as a kid. This one gets an upgrade by including the intricacies of royal politics in the mix. 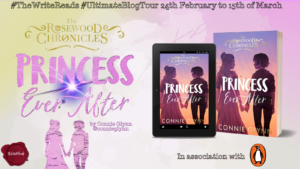 Return to the magical world of The Rosewood Chronicles in the fifth and final instalment of this gorgeous series for fans of The Princess Diaries and Harry Potter.

Ellie is a rebellious princess who is no longer hiding her real identity.

Lottie is her Portman, wishing that she could shield Ellie from the threat of Leviathan.

Jamie is Ellie’s Partizan, a lifelong bodyguard sworn to protect the princess at any cost – but has mysteriously disappeared.

Not all of the trio have made it back to Rosewood Hall. Can they be reunited? And at what cost?

With the crown at risk, the stakes have never been higher… 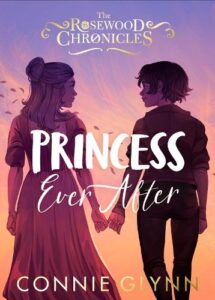 Connie Glynn has always loved writing and wrote her first story when she was six, with her mum at a typewriter acting as her scribe. She had a love for performing stories from a young age and attended Guildhall drama classes as a teenager. This passion for stories has never left her, and Connie recently finished a degree in film theory. It was at university that Connie started her hugely successful YouTube channel Noodlerella (named after her favourite food and favourite Disney princess). After five years of publicly documenting her life and hobbies to an audience of 900,000 subscribers on YouTube, Connie closed the book on the Noodlerella project in a bid for more privacy and to pursue her original passions in the performing arts. Connie now writes music and fiction full-time. Follow Connie on YouTube, Twitter, Instagram and Tumblr @ConnieGlynn

This one sounds like an engrossing tale. I  would definitely love to check this one out just to get immersed in that world of royalty and the adventures that follow. If you’re interested in the middle grade to YA fantasy series genre, give it a go as well!