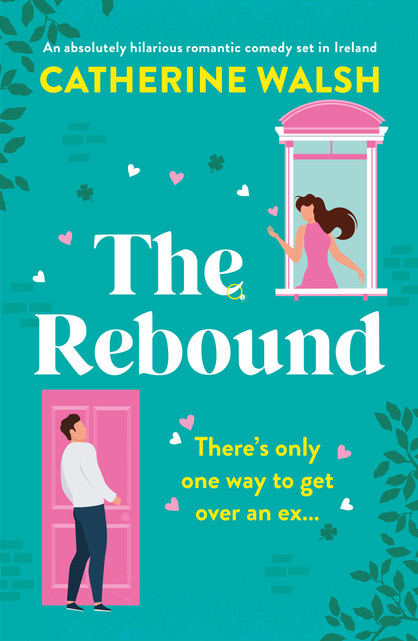 Categories: 2022, Book Discussions, Book Reviews, Chick-lits, Contemporary, Contemporary Romance, Romance, Women's fiction
Tags: catherinewalsh, coneteporaryromance, netgalley, romancereads, therebound
Author: Catherine Walsh
Genres: Chic-lit, Contemporary fiction, Contemporary Romance, Romance, Women's fictions
Publisher: Bookouture
A newly single girl. A tall dark handsome stranger. What could go wrong? It’s 7 a.m. on a Monday morning and Abby Reynolds isn’t where she wants to be. She wants to be in her beautiful loft apartment in Manhattan, drinking a coffee with her fiancé. Instead, she’s heading back to the childhood home in rural Ireland she swore she’d never return to, with some big old secrets. Namely that she’s suddenly found herself unemployed, homeless, and absolutely 100% single. She’s feeling all out of luck. Until the first person she meets after she touches down is an absurdly hot guy called Luke, who offers her a lift home. Gazing deep into his sparkling emerald-green eyes, Abby knows instantly that he’s exactly what she needs to take her mind off everything. The perfect rebound. It’s a flawless plan. Until the next day, when Abby realizes who he actually is. Not just a stranger. He is, in fact, Luke Bailey, aka the boy next door. Luke Bailey who—so help her God—she’s pretty sure she once shared baths with, back when they were kids. Not that she can allow herself to imagine him in a bath now, not without blushing from head to foot. And judging by the smirk on his face, the same Luke Bailey who’s known exactly who she was the whole time… And who, like everyone in the village, still thinks she’s a high-flying New Yorker… who’s getting married next year. Abby is certain getting under Luke will help her get over her ex. But the truth is stopping her. Can she admit to everyone back home that she’s single and has lost everything? Because, if she wants the boy next door, she may just have to… The perfect feel-good romantic comedy that will make you laugh until you cry and fall completely in love. Fans of Sophie Kinsella, Marian Keyes, and Emily Henry won’t be able to put this down! (Goodreads)

The Rebound is told from the main character, Abby’s perspective. Abby has a likeable self-deprecating tone to her which makes her relatable and easy to follow.

The story had quite the wholesome vibe like a Jane Austen novel. As in where the hero meets the heroine and confusion arises drifting them apart and bringing them closer back and forth. It kept the plot moving at a reasonable pace. However, towards the end, even if it didn’t lag, the book felt long. It spend quite some time in detail about things that never really came back again. Other than that, this was an almost perfect read.

Abby and Luke are the main characters in the story. But, it would be unfair to ignore a significant amount of supporting cast which made the entire story even more entertaining.

The chemistry between the leads is striking right from the first meeting and it makes the reader root for them and keep turning the pages until they know their fate. The situations where these individuals were put in isn’t out of the realm of possibility in the real world. It made their conflicts more accessible and naturally generate empathy for the characters.

As mentioned before I am a fan of sibling dynamics and the story aced that department bringing sisters who are diabolically opposite together. The romance panned out to be a healthy and aspiring relationship which is definitely a bonus. It is not your usual, the ex is a douchebag and the hero saves the day. It is more about people who do what they think is right at the moment.

Overall, The Rebound is a witty and charming romance that takes place in an Irish village. It is picturesque in its own way and filled with colourful characters.