Fix Her Up | By Tessa Bailey

Fix Her Up | By Tessa Bailey 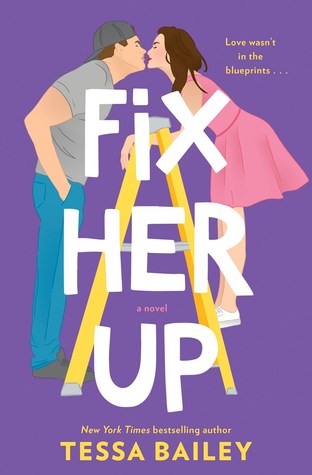 Categories: 2020, Book Discussions, Romance
Tags: FixHerUp, hotandhammered, Romance, romancereads, tessabailey
Author: Tessa Bailey
Genres: Chic-lit, Contemporary fiction, Romance
Series: Hot and Hammered #1
Publisher: Avon
Georgette Castle’s family runs the best home renovation business in town, but she picked balloons instead of blueprints and they haven’t taken her seriously since. Frankly, she’s over it. Georgie loves planning children’s birthday parties and making people laugh, just not at her own expense. She’s determined to fix herself up into a Woman of the World... whatever that means. Phase one: new framework for her business (a website from this decade, perhaps?) Phase two:…

Before we get into this, I have heard mixed reviews about this book. So I went into it with the least of expectations. Surprisingly, the book had enough depth to pique your interest. The book shifts between the two main characters Georgie and Travis in terms of the narrative. However it is mostly focused on Georgie.The plot has some questionable motives and actions. Do they really need to go through all that to prove themselves instead of getting ahead in life? What do you know? Some people need that emotional support and mask it under pretences, apparently. Anyway even if you question the basic motive of the characters for being together (which looks pretty unnecessary to an outsider), you cannot miss the sizzling chemistry between the main characters right from chapter one. And I am not talking about the intimate scenes. Although, there’s a lot of attention to detail in that department. Not that I am complaining.

Georgie is the youngest member of the Castle family and she wants everyone to take her seriously. Travis Ford is caught up in a stereotype and when his career is at a turning point he desperately needs some image building. Those are definitely characters who can make an interesting story. However, you might question the way they chose to get what they want. Interestingly, the book itself admits that Georgie could do it on her own.

I am all for female independence but I think even a broken man would want to stand up for himself instead of being a damsel in distress. Travis was a bit too much on that side at times. As a love story, Fix Her Up, did a perfect job of building up the tension between the protagonists, giving them incentive to work on themselves. Yet, at the same time, they are completely clueless about what the other person wants. On that note, I can totally relate to this book. The supporting characters in the book are worth mentioning as well although their time in the story was too short.

Fix Her Up is your pick for a steamy romance read if you don’t dwell too much into the why’s and what’s of your MCs. Overall I enjoyed the book and wanted to know how the characters would clear up the mess they had made. That counts for an interesting read.

About the Author
Get your book here : Amazon_IN Amazon_US Barnes & Noble