Closer Than You Think | By Darren O’ Sullivan

Closer Than You Think | By Darren O’ Sullivan 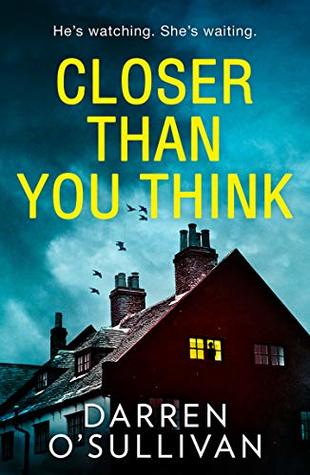 Categories: 2019, Book Discussions, Mystery Thriller
Tags: murdermystery, mysterythriller
Author: Darren O'Sullivan
Genre: Crime Thriller
Publisher: HQ Digital
Claire Moore, the survivor of a decade ago serial killing, struggles to come back to her normal life. Ten years later, Claire is preparing herself to face her past. But it is just not Claire who is coming back. The Black-Out Killer has been waiting all these years too. Is he Closer Than You Think? Will she survive this time?

Darren O’Sullivan has worked as an actor and director for stage. His idea for writing theater later developed into his debut novel, Our Little Secret. Besides, Closer Than You Think he has also penned Close Your Eyes.

Claire Moore, the survivor of a decade ago serial killing, struggles to come back to her normal life. Paranoia and fear grips her every single day and then there is a strange guilt as well which stops her from moving forward. Ten years later, Claire is preparing herself to face her past and the fears and grief that come with it. But it is not just Claire who is coming back. The Black-Out Killer has been waiting all these years too. And he is back to get Claire. Will she survive this time? Is he Closer Than You Think?

This is a slow burn book to begin with. The narrative alternates between the protagonist and the antagonist. The protagonist in first person and the latter in third person. I couldn’t see the point in the distinction. Perhaps the book intended to keep it vague or to distance the narrative of the villain from the reader.

If you’re a reader who is into the thriller genre for the sudden twists and dramatic events, this book is not for you. The plot is pretty much explained in the synopsis itself and you get to see the elaborate version in the book. In the end it pays off with a great twist but it doesn’t surprise you or thrills you.

Even though the plot didn’t have much to offer, the characters in this book were really strong. You can see their inner struggles and growth through out the story, especially Claire Moore. The characters around her also compliment the story to a great extend.

The book talks about survivor’s guilt, PTSD and shows how a person struggles to cope up with a tragedy in the modern era. It is not just one incident, mostly the people who suffered have to live it again and again with the social media and mass media trying to create sensationalism.

Also, we have a killer on loose who is waiting for the opportunity where the world glorifies him as this invincible personality even though condoning his actions. These are very much real situations and characters.
Despite having such heightened theme and characters, the book lags somewhere, not quite receiving the much needed elevation.

Overall, this is a one-time read for the sake of the edgy characters and bubbling tensions. The ending will definitely surprise you but one might wonder whether it was a long walk for a small cup of water. You won’t lose interest with the plot but you won’t be sitting on a stretch without being able to put down the book.

Have you read this book already? Then make sure you leave your thoughts in the comments below.

You an get your copy here :