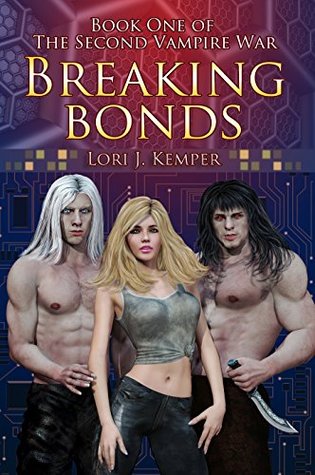 Categories: 2019, Book Discussions, Fantasy, Science-fiction
Tags: Fantasy, science fiction
Author: Lori J Kemper
Genre: Science fiction/Fanatsy
Series: Breaking Bonds : The Second Vampire War
A risky choice frees Megan from her cancer. But the cure comes with a price. The Mega program promises amazing super powers, age regression and restored health. Instead, the physicians she trusts strip her of her identity and abandon her to a post apocalyptic wilderness fraught with danger. With only fragmented memories to hint at who she once was, she embraces a new name, Liz. In her quest to find answers, she finds herself swept…

Breaking Bonds definitely sets up the tone for an intriguing and entertaining plot right from the prologue. The third person narrative helps to give the point of views of various characters though it is mainly focused on Liz. This book is definitely a page turner. If the book had to be rated merely by it’s premise, world building and set up, this one definitely is a five star book.

However, the plot is a bit all over the place. The first half of the book spends enough time on characters and their mutual dynamics. Certain characters that were given a lot of hype didn’t make much of an impact in the latter half. There is an abrupt influx of characters and events, which didn’t seem quite striking. Hence it detaches the reader from the fate of the story.

The one major thing in the book that I found lacking are relatable characters. Yes, the story discusses oppression, slavery and torture. But  for some reason, the characters didn’t evoke the much needed sympathy that such situation warrants.

Even Liz, a character so powerful seems to be too gullible to the point that it makes her look like a pushover most of the time. She didn’t react to some serious betrayals and it was all taken along the stride which did not bode well with the person of conscience that she was portrayed as. This inconsistency in her character makes it difficult to follow Liz.

The bond between Michael, Liz and Matthew seems the only one that has some depth. The rest of it felt too rushed.

The conflicts in the story gives it life. There is an air of mystery throughout and it keeps the story moving forward. However, as far as the second in command goes, this story has too many. Each of them acts on their own without thinking about the impact it would make on the others. Again, it creates a detachment to their immense sufferings and fate as far as a reader is concerned.

Overall, I thoroughly enjoyed the first part of the book. But then it became muddled up after a point. If you’re a fan of warring faction stories with a science fiction background ( such as The 100) you can give it a try. Personally, I won’t be reading the second part of this book. This one is not for me.