The Gift of Dragons | By Rachel Greco 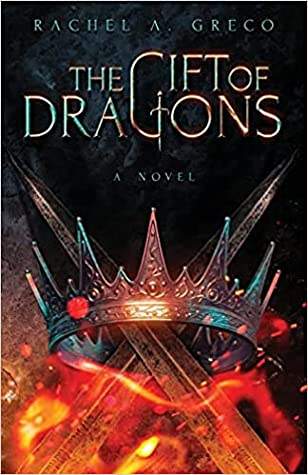 When the prince Adelaide seeks to overthrow tries convincing her that the legendary dragons exist and need help, Adelaide must decide where her true allegiance lies before the kingdom shatters.

Ever since the Gyndilians murdered her sister, Adelaide has plotted a rebellion to overthrow the king and prince who failed to protect them during the attack. Following her across the country is a stranger — not just any stranger, but the prince she’s hoping to overthrow — and Adelaide’s plans begin to collapse. But Prince Elias has his own dangerous secrets — secrets connected to the dragons that once lived in the land. If he can’t earn Adelaide’s trust, there may never be any peace for Adelaide, her people, or the dragons.

In The Gift of Dragons by Rachel A. Greco, the fate of two species rests on the tip of a dagger. Can Adelaide overcome her prejudices and thirst for revenge to do what’s best for her people before rage and sorrow consume her?

The Gift of Dragons is told by both the main characters, Adelaide and Elias – perspective. Adelaide has a witty tone and Elias is all adorable and compassionate.

The plot and the world-building keep you engaged. With even pacing, and twists and turns throughout the story, it is a fun ride.

Adelaide is a rebel while Elias is the prince looking to bring peace and well-being to the citizens. When the two unlikely characters are paired up for a journey, they learn more about each other. The ensemble cast isn’t fleshed out too much, but the plot mostly focuses on the main characters.

There are, however, a few glitches at the beginning of the plot. Elias’s newly found interest in Adelaide came out of nowhere. While most of the story depends on the connection between the two, the foundation seems a bit shaky.

The central theme of the story is breaking up prejudices and opening your mind to learn new things. Àdelaide battles with her own hatred. Meanwhile, Elias has to get out of his privileged position and see more of his kingdom and subjects.

The ending was a bit dramatic. However, it was open-ended enough for you to anticipate a sequel.

Overall, The Gift of Dragons is a neatly packaged fantasy that you can pick up if you’re in the mood for a clean YA fantasy.