Categories: 2021, Book Discussions, Book Reviews, Contemporary, Women's fiction, YA Contemporary
Tags: #badhabitsbook, netgalley, thewritereads, UltimateBlogtour
Author: Flynn Meaney
Genres: Contemporary fiction, Women's fictions, YA Contemporary
Alex is a rebel from the tip of her purple fauxhawk to the toes of her biker boots. She's tried everything she can think of to get expelled from her strict Catholic boarding school. Nothing has worked so far - but now, Alex has a new plan. Tired of the sexism she sees in every corner of St Mary's, Alex decides to stage the school's first ever production of The Vagina Monologues. Which is going… 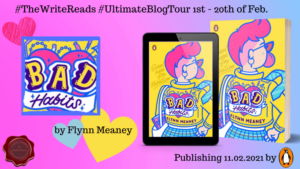 Bad Habits doesn’t wait for a build up. It starts right in the middle of action establishing Alex as the girl in trouble. Alex is witty, outspoken and yet has that naïve innocence in her voice that we associate with her age. The  conservative St Mary’s gets a new perspective when viewed through Alex’s lens and it is certainly fun to follow.

The plot is dynamic throughout the first act and the second. Except, at some point it had me go, where is this going? But in the end, each of those small incidents were brought back and it all made sense. The placement of each scene and its significance became clearer as the plot moved forward and that is the sign of good storytelling. 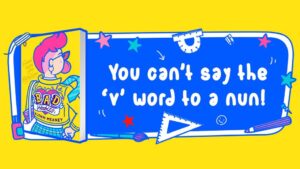 While Alex is the core voice and eyes of the story, personally for me, it was Mary Kate who stole the show. I guess it is because, like many other women and even the author herself, I could relate to Mary Kate more. Only a chosen few inherently question the patriarchal set up. Most of us truly get swept away by the fairy tale fantasy and then reality hits at some point. There could not be a better character arc other than that of Mary Kate. While, Katie Casey is too goody two shoes, Mary Kate had a balance which was leaning a bit too much on the rule abiding side in the beginning.

Alex had her own arc and it surprised me how she never got her own solo spotlight but actually managed to go through a full character development. The romance was subtle and adorable. And honestly, I would have been disappointed if the “walk around the lake” didn’t turn out the way it did.

Bad Habits, is a must read if you have thoughts about every day sexism no matter what your gender or age is. Coming from a rather conservative or traditional society and growing up in a similar academic situation -where you are not allowed to wear big ear rings for some reason- this one hits a lot of chords for me.