Categories: 2019, Book Discussions, Fantasy
Tags: booktasters, dream factory ghosts, Fantasy, john simes
Author: John Simes
Genres: Fantasy, Science fiction/Fanatsy, YA Fantasy
Series: The Dream Factory
Publisher: Coolingwood Publishing and Media Ltd
When a clandestine agency abducts his parents, a young boy escapes to the family’s remote beach hideaway. But as love blossoms on the beach, chaos overruns his village, and he eventually returns to find that all hope is not lost. An uplifting and illuminating experience that is as visual as it is visceral, John Simes delivers a total reading experience, engaging, vivid and – above all – inspirational. (Courtesy   Goodreads)

I received an eBook of ” The Dream Factory : Ghosts” from the Booktasters in exchange for an honest review.

Set in an English village, The Dream Factory tells a mysterious story through various characters. The narrative shifts through different characters and even the cats sometimes. However, it moves the story forward. There must have been some cultural and local references that I missed, but given the subtle and somewhat unusual names of characters and places, the book does have its own fun.

However, the plot is complicated as it is with enough mysteries. The narrative that shifts abruptly and randomly makes it difficult to follow the story if you’re not too careful. While dealing with a futuristic intelligence, it is already too much to grasp the concept. The muddled narrative sometimes breaks the flow of the story. Despite that, the story keeps you interested and on your toes if you’re paying attention. 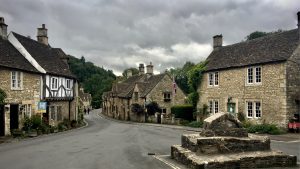 Photo by Olivier Collet on Unsplash

This is one of the few books, where the protagonist is practically absent for most of the time. Peter himself becomes a plot device. Everything other people do and say affects him and the things around him, instead of Peter doing anything himself. Yet, you get a glimpse of who Peter his and what his dreams and hopes are. You meet his family, the people he care about and sympathise with them. You immediately root for them to win.

In the premise of a futuristic story, the book is diving deep into an ancient conflict. There are always people who resist what is new and unfamiliar no matter how good it is. It is not about killing someone or destroying something. This is about killing an idea. The damage that such an action causes is far more than anyone can contemplate. This vital conflict is handled delicately in the story.

However, the ending becomes a little bit mixed up again with the vague narrative. Otherwise, there are enough venues to go into a sequel and you will want to know more about this future technology and the people who created it as well as the ones who are after it.

Overall, the Dream Factory is an intriguing and enjoyable book. Some may go on and read it twice to make sure what exactly happened. The amount of symbolism the book uses is quite something for a discussion and debate. For that, you have to read it with keen interest and an open mind.