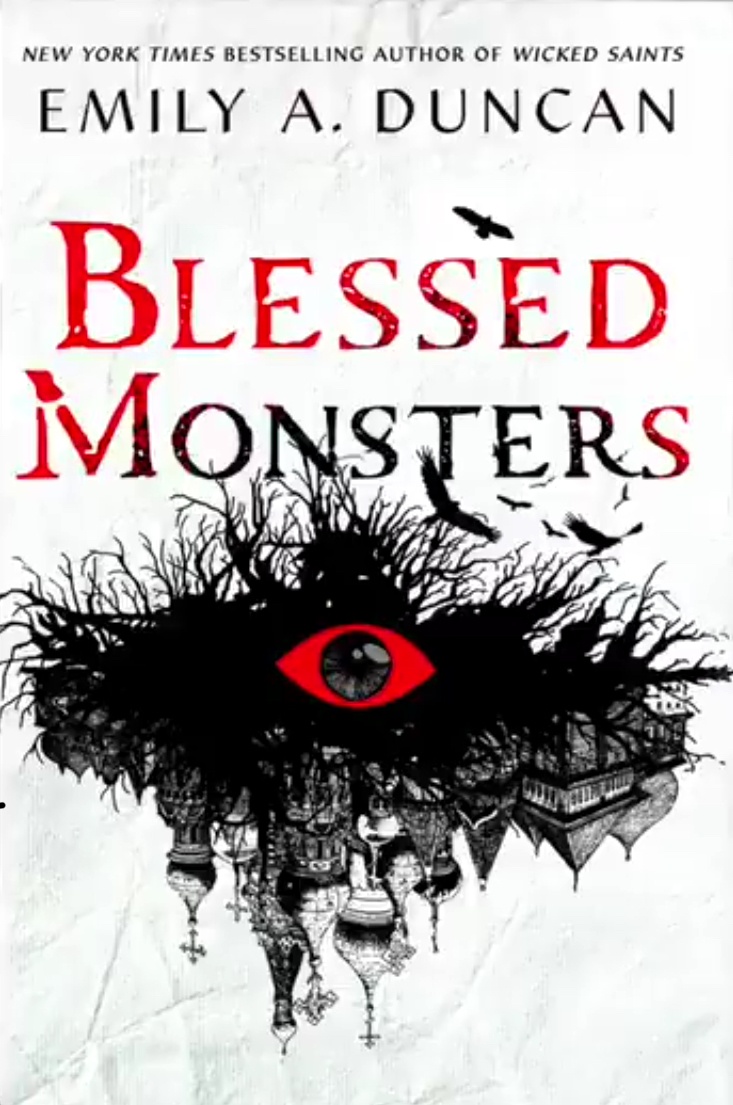 Categories: 2021, Book Reviews, Fantasy, YA Fantasy
Tags: BlessedMonsters, YAFantasy
Author: Emily A Duncan
Genres: Fantasy, YA Fantasy
Series: Something Dark and Holy
Publisher: Wednesday Books
The girl, the monster, the prince, the queen. They broke the world. And some things can never be undone. In Emily A. Duncan’s Blessed Monsters, they must unite once more to fight the dark chaos they've unleashed—but is it already too late? The startling conclusion to the instant New York Times bestselling Something Dark and Holy trilogy.

Blessed Monsters is no doubt an evenly paced story following a similar story structure as it’s predecessors. One of the themes of the series is a race towards an impending doom. You know that whatever is happening around is too big for your main characters to handle, and yet they’re determined. As a result, you actually buy the fact that these dark and twisted young adults are somehow going to save the day.

The plot continues from Ruthless Gods. I guess it is some kind of skill to regurgitate almost a similar plot and yet keep your readers pinned. Because, when you come to the basics, only the roles are interchanged. The stakes are definitely higher. Other than that, it all follows a similar pattern since book one. Except for the idea of theology in this fictional universe, there wasn’t much new going on.

Serefin was my favorite character from book one and that hasn’t changed. I loved his overall character arc and the learning curve that he had in this particular book as well. He has finally accepted who and what he is. But he is never resigned to his fate. He keeps challenging himself and the situation around him. Despite being betrayed , he is ready to put all that behind and tries his best to save all people. No wonder, he would make a better king.

Nadya and Malachiaz have always felt mirror like characters to me. They’re both fanatics and care very less about the demolition that they cause. Nadya might show some remorse, but when it comes to it, she would only choose what suits best to her beliefs. Malachiaz has a similar disposition except for the remorse part. He is unabashedly himself and is fine with that for the most part.

The complexity of the story definitely had me going. But there were a few things that I , personally , felt are problematic. Maybe, I am projecting what I have grown up with on the story. I come from a place where I have heard people committing actual crimes in the name of faith, any faith. So, when you trivialize the gory and violent actions of one of your lead character, claiming he is possessed and then tell us he enjoyed what he did , it becomes problematic.

It is fiction. But even in fiction, actions must have equal consequences. The pay off on that regards was less than satisfactory. It leads you to believe that one can get away with anything so long as they help save the day.

Blessed Monsters had me hooked from the start. It felt like walking the last leg of a long and tiresome journey. And the whole trilogy was one long journey. However, by the end the reward for such an epic journey seemed quite passive. The supporting cast did a great job to keep thing entertained. But they ended leaving a lot of options to be explored. Overall, it was a one time adventure for me.