Ruthless Gods | By Emily A Duncan 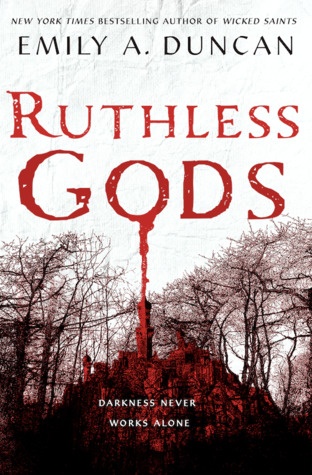 Author: Emily A Duncan
Genres: Fantasy, YA Fantasy
Series: Something Dark and Holy
Publisher: Macmillan
Nadya doesn’t trust her magic anymore. Serefin is fighting off a voice in his head that doesn’t belong to him. Malachiasz is at war with who--and what--he’s become. As their group is continually torn apart, the girl, the prince, and the monster find their fates irrevocably intertwined. They’re pieces on a board, being orchestrated by someone… or something. The voices that Serefin hears in the darkness, the ones that Nadya believes are her gods, the…

Some books thrive on characters and their conflicts while suffer with poor narrative. The most successful factor about Ruthless Gods is its narrative. I listened to the audiobook which made it even more engaging. The whispering of god like beings and supernatural forces were prominent in the format which I am not sure would have had such a strong impact in my head if I were merely reading the EBook.

The world building gets even more complex in this one. Yet, as a reader you never lose sight of it. The symbolism and theology aspect of the story really got my attention.

I am a Hindu which means I come from a background of having many Gods and strongly believing in one. By no means am I comparing my faith to the books for some would feel that’s blasphemy. No, that is not my intention. All I am trying to convey is that I get where the characters are coming from and where their loyalties lie and why it is the way it is. Nadya’s unquestioning devotion and her angst to be the chosen one makes sense to me. Because, as a kid , I grew up listening to millions of myths that were about the feuds between godly powers. Sometimes it is the good vs evils. Sometimes it is a saint vs Godly powers. The idea of war in the story makes sense in that regard.

This is where I had an issue with the book. I enjoy a good conflict and character arc. It is one of the few things I appreciated about Wicked Saints. However, Ruthless Gods follow the tested and tried method of second books.

It simply demolishes all the character development from Book 1 and goes back to the starting point. From there on, it attempts to create a different version of the same adventure from Book 1. In this case, it is enhanced with gore and trauma which is tossed aside the moment the characters have something else to focus on.

I still feel partial towards Serefin because he is the least selfish of them all. The rest of them have very questionable morale and would create any kind of chaos to justify their goals.

Ruthless Gods propels the story forward. The chaotic kingdoms are rattled even more by the end. There is a lot left which gets your attention for the third book. So yes, I am going to continue reading the series. But I won’t be back for another round of gore.