Finally I am completing my first ever book tag. I have been tagged by Bookishwormy. Thank you for the tag. It is special as it is the first book tag I ever got.

On to the task now, 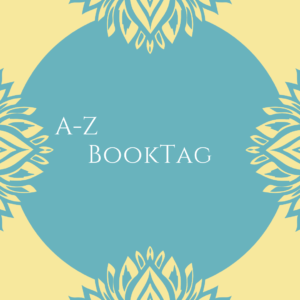 A- Author you have read the most books from

I am a huge fan of Sophie Kinsella. So that would be her.

B- Best sequel ever

This is an Indian book. The Secret of Nagas by Amish Tripathi.

I am currently listening to Haruki Murakami’s Hard boiled Wonderland and the End of the World – quite a tale!

Tea, with a bit of ginger and no sugar. Heaven!!

I have adapted quite well to E-reader. It’s affordable, portable and convenient in a lot of ways. But nothing beats a physical book. However, I read far more from my Kindle now so I vote for E-reader.

F- Fictional character you probably would have dated in high school

When I read Wuthering Heights, I had a crush on Hareton Earnshaw. So probably him.

G- Glad you gave this book a chance

The Twilight saga. I was skeptical after watching the first movie and all those negative criticisms but my friend insisted on reading them and then I ended up liking it a lot.

Flipped by Wendelin Van Draanen. Do not dismiss it as a children’s book because it is so much more than that. If you read it deeply enough it has the power to change your perspective about a lot of things in life. It flips you!

I- Important moment in your reading life

Just finished “A Game of Thrones” by George R R Martin. That was one long book. Took me months and several books in between and finally finished it when I shifted from Kindle to Audiobook.

M- Major book hangover because of

Rather than a hangover, I would call it various phases of my life. The Classic hangover because of Jane Austen books, Da Vinci phase because of Dan Brown books, Twilight phase, Mythology phase because of Amish’s books, Shopaholic phase, Fantasy phase( ongoing) and Dystopian phase.

N- Number of bookshelves you own

As I have mentioned earlier, E-books are the ones that mostly fit into my budget. My Kindle library is probably bigger than my Bookshelf. Technically I have two racks of my cupboard for a bookshelf (a safe and a rack to be precise)

I’ve got your number by who else, Sophie Kinsella. It is such a feel-good story. Any time I feel down, I read it and the world is better again.

Q- Quote that inspires you

“I would always rather be happy than dignified”, Charlotte Bronte, Jane Eyre.

I don’t normally leave a book half-way but I did once. That was when I read “Revolution 2020” by Chetan Bhagat. Why… o why!!!

Scion of Ikshvaku by Amish Tripathi. It’s been almost a year since I bought the second book in the series but haven’t read it yet. Need to start soon.

• I’ve got your number by Sophie Kinsella (yeah I know!!)
• To kill a Mocking Bird by Harper Lee
• Wuthering Heights by Emily Bronte

V- Very excited about this release more than others

OK, I am miles behind in the “Song of Ice and Fire” series but like everyone else I just want to see the next book released, “The Winds of Winter” soon.

If I confess this I will probably be banished from the bookish community. Still, I am taking a chance. Before reading a book that I know is going to be emotionally heavy or just out of mere curiosity, I take a peek at the last sentence of the book. Yep, I know what can be worse, right?

I don’t own a shelf. But on my Kindle library that would be The Handmaid’s Tale by Margaret Atwood

Z- Z snatcher–book that kept you up way too late

Most recently, that would be Man In the High Castle by Philip K Dick

There it is, all done. Hope you enjoyed reading the book tag.