This is a time of festivals all over the world. Speaking of festivals how can you not talk about Diwali? Growing up you all will be familiar with hearing stories about the origin of our festivals and how we came to celebrate this particular day. While there are many festivals which are specifically meant to be celebrating the victory of good over evil, there is nothing more fascinating than “Diwali- the festival of light”.

The diyas, crackers, gifts, sweets and all that joy we frantically spread to celebrate that victory. Different parts of India have different myths surrounding Diwali but all of them are resonating with the basic concept of the victory of light over dark illuminating the night with oil lamps and positive energy. In the spirit of this celebration, Bookbug is coming up with a list of books that depict this theme in varying degrees.

Do I even need to introduce this book to you? This is a classic tale of Good vs Evil. A sequel to Hobbit, the book is published in three volumes. “The Fellowship of Ring”, “The Two Towers”, “The Return of the King”. Honestly, I don’t have anything else to say about this. Firstly because I haven’t read it yet and there is nothing new that I can say about this than what has already been said and done. George R R Martin has remarked that the Tolkien books inspired him to write “A Song of Ice and Fire” series.

So, if you want to read an epic tale of all the good forces uniting against the evil, a kind of evil that tempts you, this is your pick.

The Shiva trilogy series written by Amish Tripathi is a completely different take on the mythology about the Hindu God, Shiva. The series consists of “The Immortals of Meluha”, “The Secret of Nagas” and “The Oath of Vayuputras”. If you are a devotee, please keep in mind that this is not a retelling but a different perspective behind the idea of the Hindu mythology. 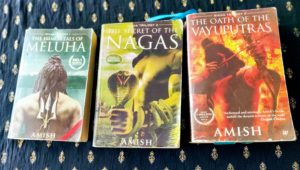 If you are someone who has no idea about Hinduism let me give you context. It is almost as if saying that Zeus was once an ordinary man who lived on Earth.

For someone new, this book does not enlighten you about the religion or the beliefs but it sheds a new light on how you view the faith. It is as if Amish’s interpretation particularly insists that the Gods we worship might have been human once upon a time and it is the way they rose above others and the consequences of their action that elevated them to the status of God.

Now, the reason why I included in the Good vs Evil trope is that this entire series is the journey of Shiva, the prophesized Neelkant of Meluhans,  who encounters evil in various forms and eventually leads a fight against the real evil. The book talks about evil from different perspectives. It explores the idea of evil rather than imposing one side as the evil villain.

Isn’t that one good series to get you into the spirit of the eventual victory of good over evil.

This is another mythological fiction by renowned Indian author and media personality Anand Neelkantan. Roll of the dice is the first book of the Ajaya series followed by Rise of Kali. The book is once again a redefining of the epic Mahabharatha, as the name itself indicates.

In the Ajaya series, you find the epic tale of Mahabharata from Duryodhana, the antagonist’s, perspective. Duryodhana who is also known as Suyodhana recites his side of the story and dwells on how the politics and history have been manipulated to suit the victors in every possible way. Again this is not the epic’s retelling and one has to view it objectively or leave the book alone. However, this is another compelling tale of what is victory and loss, who determines the good and the evil in a world where the strong always dominate over the weak.

Well, this is another book that I thought should be included in the list of Good vs Evil. And for those who are wondering why this is on the list and not Harry Potter, the reason is everyone knows Harry Potter is about the battle of good against the evil and how the heroes save the day.

On the other hand, the Twilight series, thanks to the movie adaptations, has been reduced to a teen romance story to the masses. It is not what I found in the Stephanie Meyer books. Over the years there might be things that I have issues within the plot, but what I liked most about the series was the inner conflict of the characters. Each struggling with the choices they have made and debating within themselves about the good and evil of their own inner selves.

The underlying theme of the book had been that all this time. Carlisle Cullen points out this very idea in New Moon, “By all accounts, we’re damned regardless. But I hope, maybe foolishly, we’ll get some measure of credit for trying”. The book completes the journey of Edward who is in search of his human side despite being made into a monster and Bella who made that choice for the sake of love and yet was somehow able to preserve what was human about her.

A subtle theme that went unnoticed in all the love triangle bravado.

And now coming back to our mythological fictions, how can I not mention the Ram Chandra series by Amish Tripathi on the occasion of Diwali. Amish continues his style of redefining the epics the way we have always known. Ram Chandra series, I believe, will be no different. The series is meant to include four books. Scion of Ikshvaku is the first book in this series, again humanising Lord Ram and his worldview of the events until Sita is abducted by Raavan. 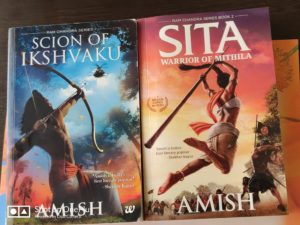 This is one of the defining moments in the entire series as the first three books depicts the tale in three different perspectives of Ram, Sita and Raavan-the antagonist. We get to see what actions led them to that particular event of Sita being abducted by Raavan. The fourth book is supposed to pick up from there and move on to an enthralling climax. Diwali is celebrated in different parts of India to celebrate the victory of Lord Ram over Raavan. In that sense, this book can truly get you into the spirit of the festival of lights.

There we go bookbugs, light those diyas, eat your sweets, use the crackers safely and now that the time for that has been fixed, enjoy a book to dwell into the spirit of Diwali.