The Written | By Ben Galley

The Written | By Ben Galley 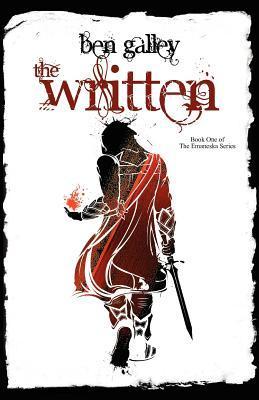 Categories: 2019, Book Discussions, Fantasy
Tags: bengalley, theultimateblogtours, thewritereads, thewritten
Author: Ben Galley
Genre: Fantasy
Series: Emaneska series
Publisher: Bengalley.com
In his fight for answers, Farden will unearth a secret that not only shakes the foundations of his world, but threaten the entire future of Emaneska. Sorcery, death, drugs and the deepest of betrayals await. Welcome to Emaneska.

Thank you #TheWriteReads and Ben Galley for letting me participate in the #UltimateBlogTour and sending me an e-copy of The Written. It is an honor to be part of something this big.

Grateful to be a part of Day 7 of the blog tour.

A spellbook has gone missing from the libraries of Arfell – a very old and extremely powerful spellbook from the time of dark elves and demons. Five scholars are dead, the magick council is running out of time and options, and the Arka is once again on the brink of war with the Siren dragon-riders.

It falls to Farden the Written mage to keep the world from falling into chaos. Entangled in a web of lies and politics, Farden must recover the spellbook before an ancient enemy rises, even if it takes journeying halfway across icy Emaneska and back.

In his fight for answers, Farden will unearth a secret that not only shakes the foundations of his world, but threaten the entire future of Emaneska. Sorcery, death, drugs and the deepest of betrayals await.

The Written is an action-packed fantasy thriller. This is a debut novel and you could feel it in the narrative itself in the first chapters. But, as the book progresses, it’s compelling and captivating, and you will be immersed deeply in the fate of Emaneska. The world building is just phenomenal. Step by step, the story reveals itself. A lot of information somehow placed meticulously at the right places. That is a lot of information but there is no confusion over whatsoever.The plot is your usual conflict of good vs evil. Yet the idea is delivered in a refreshing manner. It reminds you of those grim fairy tales with magic and makes you wish that, maybe the ancient world before we knew it, actually had such wonders in it.

The entire story rested upon Farden. He had a great character development over the course of the book. It took a few chapters to actually buy him as a character, whom you could root for. Farden who started out as a mere soldier, who took orders, finds himself in this adventorous journey. Each chapter revealed a little something about him and half way around the book, he has become this immensely close character you deeply care about.

Before you know, you’re part of this fantasy land with Sirens, dragons and the mages of Arka.

The conflict of the book is your regular forces of evil trying to take over the good in the world. You can easily pick the side you want to be. There was always an element of surprise and danger around each corner. The action was written in a detailed and enjoyable way.
However, the politics and intrigue was a little bit predictable towards the end. You just need to pay attention. And if there was something that should be picked apart, it would be the lack of character development for certain characters. Perhaps, the narrative based on Farden solely, was the reason we couldn’t see most of it. Cheska, in particular, felt like a mere plot device. Not much insight was given behind several characters and their actions. But the book compensated with a powerful protagonist and antagonist powered by a nail biting finale battle.

Overall, The Written is an exciting read. Honestly, it could be a great Hollywood movie. You would want to read the rest of the series for sure. It delivers a powerful message too. You can choose what you want to be with whatever you’re given in this life. It is your choice.

Ben Galley is an author of dark and epic fantasy books who currently hails from Victoria, Canada. Since publishing his debut The Written in 2010, Ben has released a range of award-winning fantasy novels, including the weird western Bloodrush and the epic standalone The Heart of Stone. He is also the author of the brand new Chasing Graves Trilogy.
____________________________
Get your book here : Amazon_US Amazon_IN Book Depository