Liam and Gwen – Entirely Yours | By Tania De Melo

Liam and Gwen – Entirely Yours | By Tania De Melo 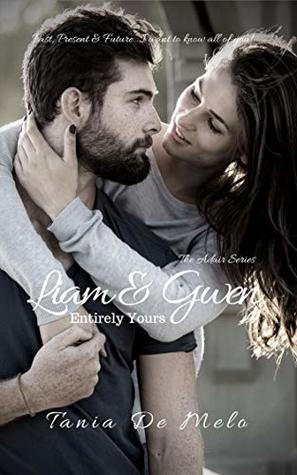 Categories: 2019, Book Discussions, Romance
Tags: Adiarseries, LianandGwen, romancereads
Author: Tania De Melo
Genre: Romance
Series: The Adair Series
Gwyneth is forced to start her life on a fresh slate unquestioningly in the small town of Emerson. As Gwen settles into her new life making new friends and relations, she finds herself attracted to the Detective Liam Adair. Both of them have a past. Will they be able to share their love and truly be each other's despite all their emotional baggage? That is what you will find out in this book.

Liam and Gwen – Entirely Yours is the first book of The Adair Series written by Tania De Melo. The author herself is a great fan of romance novels and Samuel L Jackson!

I received a copy of the book in exchange for an honest review.

Gwyneth had an unusual upbringing in her home. Just when she thought she was going to steer her life into being her own self, her life is turned upside down when her family wants her to move in to the remotely small town, Emerson. Here she is Gwen and is forced to start her life on a fresh slate unquestioningly. As Gwen settles into her new life making new friends and relations, she finds herself attracted to the Detective Liam Adair. Both of them have a past. Will they be able to share their love and truly be each other’s despite all their emotional baggage? That is what you will find out in this book.

This is a debut novel, the first of Adair series. It was well put together in terms of plot and does enough to keep you interested. The narrative shifts between Liam and Gwen. This gives insight as to where they are coming from and what influences their actions and reactions. At times the abrupt shifting of events reminds you it is a debut novel.However there was never a dull moment in the story. It had that romance mixed with a thriller vibe going on. And it managed to keep the mystery up to a certain point exposing on a need to know basis.

It’s an ensemble character story and each one had a well defined personality. The romance was not just a switch on at first sight basis. It felt realistic because of the way it was portrayed. The characters had their own internal conflicts and it took time even to start a possibility of romance. I liked that it was a slow brew.The bond Gwen shared with Liam’s family was adorable. The friendship with Ben and Kai was a particular highlight. It all fell into place. You take your time and be around and that is how you form a relationship. Even under the bizzare circumstances the sisterly bond between Ati and Gwen somehow made sense. They looked out for each other. Every single character was distinct and I say this because by the end of the book I remember most of their names and how they are part of the story.  This shows that they are well defined and rightly placed. This is important because this is the first book of the series. And in order to be really invested in the coming books, you should have a definite idea about each character.

However, there were certain things in the book that I took issue with. For example, I am not a great advocate of stories with a notable age difference ( People say Twilight but it was a fantasy and could be argued that the logic was different in that world.) But when you’re not in the realm of fantasy and your characters are people you relate to from every day life, it’s kind of a big deal. In its defence, the book itself addresses the issue but I got the feeling it is romanticising the notion which I couldn’t get on board with.

The thriller was built up nicely but I wanted it to be prolonged more and played at. Perhaps it’s just me who wants more from a well placed story. But the dark part of the book developed and ended too hastily considering how it was built-up. Also I wanted to see a lot more things unfolding between Liam and Gwen.

Overall, I enjoyed the book. It was a good mix of suspense and a central romance along with several blossoming love stories for the supporting characters. I’m sure the series will follow each one of them and I’m eager to know more about them all.

You can get your book here :