Desolation I By Jesper Schmidt

Desolation I By Jesper Schmidt 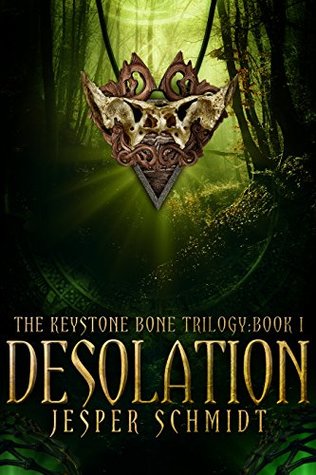 Categories: Book Discussions, Fantasy
Tags: #keystonebone, Fantasy, mystery
Author: Jesper Schmidt
Genre: Science fiction/Fanatsy
Series: The Keystone Bone Trilogy
Publisher: CreateSpace Independent Publishing Platform
Desolation is the first book of the Keystone Bone Trilogy series. Aae is an outcast living in the outskirts of her village. She was starting to find meaning in her life with her loving partner Linghron when one night everything in her life takes a twisted turn with the return of her mother with one last wish.

Jesper Schmidt is an author with a passion for fantasy and describes himself as “Focused Ambition”. Desolation is the first book of the Keystone trilogy which is followed by “Deprivation” and “Damnation“. Besides these fictional books, he has also written many books that could help authors particularly if they are into the genre of fantasy and world building. He also runs a Youtube channel called “Fane of Fantasy” where you can find a lot of help in creating fictional fantasy.

Desolation is the first book of the Keystone Bone Trilogy series. Aae is an outcast living in the outskirts of her village. She was starting to find meaning in her life with her loving partner Linghron when one night everything in her life takes a twisted turn with the return of her mother with one last wish. Aae fights her own demons, the demons who were only supposed to be true in the legends and Field Blight – a deadly disease that is particular to her clan when they leave the homeland in her quest to fulfill her mother’s wish.

In this perilous journey, the politics of the empire and the legends only heard in stories come true before Aae. The Keystone Bone is the only thing that is capable of safeguarding the world against the evil demon. How Aae finds herself amidst the adventure and deals with her desolation is an incredibly thrilling journey in this fantasy world.

I received a Kindle edition of this book from the author, Jesper Schmidt in exchange for an honest review and I would like to thank him for the offer.  I really had a good time reading this book even though it took a while.

This is an adventurous book without any doubt. I am more of a contemporary fiction person than fantasy books yet I enjoyed reading it. However, it took me a long time to finish this book. And mostly the first few pages were the ones that took the longest time to get by. The narrative shifts from each character which is fine by me. I was able to follow each one of them and dwell into their conflicts as a mute spectator which is what the book intended to do. Initially, it was difficult for me to come to terms with the fantasy world and who was what. What these worlds were.

I don’t know either it is again my inexperience with the genre or if the narrative was a bit too fast to my liking. I need my sweet time to settle. Once I got the hang of it, the book went by fast. I couldn’t put my Kindle down until I got through the pages. The plot was weaved in an intricate manner. Once you grasp the premise it is easier to follow. And the book does a good job of bringing it all together in the end without leaving loose ends except for one which I am sure will be picked up in the second book.

From the synopsis, you might have gathered that we follow the story of Aae. It is natural to expect that you are supposed to root for Aae to succeed and want her to win. I ended up appreciating Ayida, the Apprentice, who is also a Duian( some kind of tree people?) like Aae.

Since I have been talking about these two solely, you might have understood that these are the ones that stood out to me. Although if I had to pick one, it would be Ayida. Both of them had a well- defined character arc by the end of the book. Apart from these two, the ensemble cast should I say had their important moments. Moments that defined them in an unforgettable way.

Premise and the fantasy element

If you are a fan of mythical creatures, elves that kind of thing, this book is for you. I have not read many books with magical premises. That might be one reason why I enjoyed it. If you are familiar with a lot of such books, you might have comparisons or benchmarks fixed. I enjoyed the overall fantasy aspect of the book. Although some portion of it was vaguely mentioned and went through in a flash. Obviously, they are meant for the upcoming books I gather.

Apart from that, I enjoyed how the journey of each character began and where they turned up except for Arkumskul. It felt abrupt to me. Keeping that aside the book had enough action to keep you hooked and there were a lot of twists and turns. Some predictable and some way too unpredictable.

In a nutshell, I enjoyed the adventurous journey in this fantasy land. At some point, the plot is good enough to make you turn the pages to see what happens next. I always like that. To me, that is a good book. It is entertaining and delivers what it promises. Not too much, not too less either.

Am I going to read the sequels? Not right away jumping to pick it up but yes, I will read the next books in time. There were enough loose ends left and I am curious to know what happened to them and how the author brings it all together.

You can find the book here

Desolation by Jesper Schmidt
My rating: 4 of 5 stars