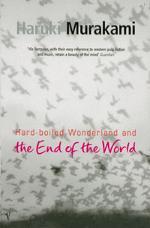 Reading a Haruki Murakami book is a ritual in itself I believe. You hear about this author and his work and everybody keeps telling you about this “reading-life” altering moment and you are so eager to experience it your self. Well, here I am trying my hand at one!!

Let me tell you, it was exactly as they all said it would be. I felt part of my consciousness waking up in a way. This book breaks all preconceived notions of cliched narrative and plot building. It makes you think, it makes you laugh all the same. That is exactly why I could not post a traditional review for this unique book. If you are someone who wants  to start reading Murakami, pick up this one. Quirky, but it is worth it.

I went into the book completely blank not knowing what to expect and it took me on an adventurous ride. I for one am someone who loves a book with a unique narrative. The second favorite thing about a book I enjoy is when it outlived the time it was published. Hard-boiled Wonderland and the End of the World as the name indicates starts as two completely different worlds with a different set of people in both. At first, you have no idea what you are in for. The odd and even chapters have a separate storyline and you follow their narrators with no clue whatsoever. The Wonderland is a world where information is everything. End of the World, however, resembles Neverland but is not exactly the same unless you remove the fantasy element from Neverland.

We follow a calcutech who has something to do with data processing, I suppose. Caught up in a bizarre situation, he meets an exemplary scientist akin to the Mad Hatter who gives him a crucial task. At the End of the World, you have the narrator who is a newbie in that world exploring the place and his role there. The narrator is clean as a white slate as his shadow and all the related memories have been separated from him.

I listened to the audiobook. So there was a distinction between the voice of the narrator in the alternate chapters. If you read the book, the initial chapters can be confusing because the two narratives actually stand out as separate storylines. As the book progresses, you get used to differentiating between the two worlds yet nothing much is revealed for the major part of the book. Despite that, it keeps you interested in that particular mysterious way.

Remember that feeling when you watched the series “Lost” and had no clue as to what was happening yet you judiciously followed the show and all its characters. Now imagine another dimension to that plot with a little bit of Black Mirror-ish twist. That is Hard-boiled Wonderland and the End of the World for you.

Another amazing thing about the book is that there is no name for any of the characters. We have a calcutech the narrator of Wonderland and the Dreamreader at the End of the World. By the end of the book though, each character is well-defined and have their unique personality. The chubby girl, the scientist, the library girl, and even big guy from the Wonderland and the Colonel, the librarian, the shadow, the gatekeeper, and the beasts are carefully sketched and developed over the course of the story. Even without names, you get to have a clear picture of each of them.

The symbolism throughout the story keeps your thought process on the edge. It feels like parts of your brain expand just by merely thinking about what you just read. The various interpretations that you can derive from the events in the book are astounding. Besides, the Wonderland that Murakami wrote in 1985 is the present day information era- a world of Big Data. Still, the story is futuristic in some sense which means after ten years or so, we can finally say this book is actually a contemporary fiction! And it is for that reason I include this in the genre of contemporary fiction.

So, as you can see I am totally invested in this. If you are a fan of things like Black Mirror, philosophy or even logical reasoning this book is for you. It certainly pushes your limit as to how much your brain can process. At least to me, it turned out to be that kind of book and that is wonderful.

Hard-Boiled Wonderland and the End of the World by Haruki Murakami
My rating: 5 of 5 stars