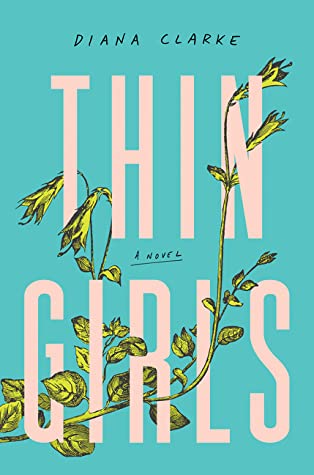 Categories: 2020, Book Discussions, Contemporary
Tags: #literaryfiction, #thingirls, contemporaryfiction
Author: Diana Clarke
Genre: Contemporary fiction
Publisher: Harper
Rose and Lily Winters are twins, as close as the bond implies; they feel each other’s emotions, taste what the other is feeling. Like most young women, they’ve struggled with their bodies and food since childhood, and high school finds them turning to food—or not—to battle the waves of insecurity and the yearning for popularity. But their connection can be as destructive as it is supportive, a yin to yang. when Rose stops eating, Lily…

Thin Girls is told from Rose’s perspective who is the main character.
Rose is battling anorexia . The story alternates between her time in the facility that she has been admitted to get better and her childhood with her twin sister Lilly.

Nowhere in this book you can actually tell that is a debut novel. The story flows with ease and there is no break in the events even if the timelines are far apart. I am mentioning this here, because the last book I read had a similar style, but it felt like reading bits and parts of a tale whereas here I enjoyed the natural flow. The plot is indeed strong. The only quip would be the ending though. It could have been a bit more elaborate.

When I heard the title, I thought that I won’t be having much to relate to it because basically I am not a “thin girl”. People who don’t want to offend me define me as “healthy”. Well, I know I am a plus size woman. Thin Girls is not just about anorexia. Yes, the book dwells a lot into the mind of an anorexic as Rose is the main character. But the book addresses all kinds of body shaming. Some you even didn’t realise you were catering too. At some point the book says that every woman in this world has been body shamed at least once in their life and they are not exaggerating.

Rose and Lilly are two sides of the coin. Between them they cover a wide spectra of  body types and body shaming. And how it shapes us as an individual. What role it plays in our relationships and not just the romantic ones.  The  stories at the end, by Lilly, eloquently told her sorrow and worries. It resonates with all kinds of collective consciousness.

The book explores sexuality without being overtly preachy. It just presents these snippets and paints a picture of how deeply our physical health is connected to our mental health. I loved that the book showed the other side too and didn’t paint anyone in particular as evil. Although, there is one abusive relationship in the book and I just felt that the character should have gotten his comuppance by the end. It is true that in real life we just get away with that negativity but for fiction’s sake, I wanted a more satisfying ending to the abusive and manipulative person.

Overall, Thin Girls is one of those books which expanded my worldview. Being a foodie, I have never considered that a person might be sick enough that they cannot eat. I realised that I have met such people in life and never knew. Also, it opened up new kind of thought process such as over exerting oneself and eating only “clean” food is still some form eating disorder. Not all of them, but excess of anything is not normal either.  Thin, Fat, Short, Tall, Big, Small , Giant , Petite, Masculine , Feminine – these might be adjectives but they don’t define you. To instigate that thought is a powerful step.