Kings and Daemons | By Marcus Lee 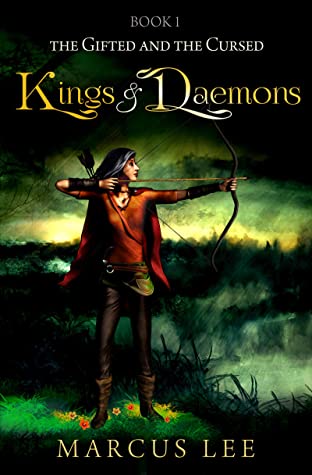 Categories: 2021, Book Discussions, Fantasy
Author: Marcus Lee
Genres: Fantasy, Science fiction/Fanatsy
Series: The Gifted and the Cursed
Over fifty years have passed since Daleth the seemingly immortal Witch-King, and his army conquered the Ember Kingdom. Now, with the once fertile lands and its enslaved people dying around him, the Witch-King, driven by his insatiable thirst for eternal youth, prepares his forces to march on the prosperous neighbouring Freestates. It will be the beginnings of a conquest that could destroy nations, bringing death and destruction on an unimaginable scale. Then, when a peasant huntress whose rare gift was concealed from birth is exposed, it sets in motion a chain of events that could alter the destiny of generations to come.   (Goodreads)

Kings and Daemons kicks off with an intriguing and fast paced plot, where each character moves forward at a definite pace like a chess piece. The narrative was distinct and vivid, moving the story forward. However, towards the end it felt like the book was dealing with a lot of plotlines. It could have truncated some of the details and be more precise.

The plot was well structured and developed meticulously. However, several plotlines brought down the pacing at times. Moreover, all the events in the book was leading to a particular grand showdown which didn’t happen in the first book. That made the entire plot look like a set up for the second book. While, that is fine in terms of the series, for readers who would like to see the completion of  a particular conflict within a book in the series, this one would fall short.

While there were a few ups and downs in terms of the overall plot development, the story takes its sweet time to develop each of the main character. It paid off as you are invested in the fate of every single character towards the second half and would find yourself at the edge of your seat while reading an action sequence.
Many characters had an arc throughout the story and yet there was room for the plot to develop some more which kept things interesting for the coming books.

As for the conflict, even if the final showdown wasn’t what you would expect, it definitely built up the tension at each twist and turn. The stakes remained high one after the other. This would make you root for the characters even more. As a whole, the book gives you that action adventure atmosphere from the start to finish.

Kings and Daemons is an action and adventure filled fantasy read that would pull you in once you spend enough time with the characters. Keep in mind, that while the series might be plot driven, this book in particular is predominantly character-driven.