The Die of Death | By Kenneth B Anderson

The Die of Death | By Kenneth B Anderson

Categories: 2020, Book Discussions, Fantasy
Tags: middlegrade, YAFantasy
Author: Kenneth B Anderson
Genres: Fantasy, YA Fantasy
Series: The Great Devil War #2
Philip's adventures as the Devil's apprentice have changed him—in a good way. Although he misses his friends in Hell, he has made new friends in life. But when the future of the underworld is threatened once again, Philip’s help is needed. Death's Die has been stolen and immortality is spreading across the globe. Philip throws himself into the search—and discovers a horrible truth about his own life along the way. The Die of Death is volume 2 in The Great Devil War-series and winner of the ORLA-Award. ( Goodreads) 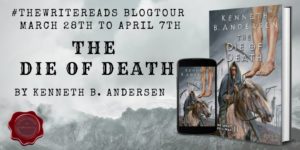 The Die of Death is a smart book right from the title wordplay itself. The curiosity and interest the title incites, is maintained throughout the story. If you’ve read and loved The Devil’s Apprentice, you’ll definitely enjoy this one too. The narrative is again the innocent commentary of a child – Philip.

The plot is steady and fast paced. There are no loose ends. Everything is tied up neatly with perhaps a hint, to expect what is coming in the next book.

Once again, your familiar characters are back. Philip ventures in to Hell to help Mortimer, Death himself. And you once again come across all those interesting people from Hell. Satina, her parents, Ravine, Grumblebeard, Lucifax and the devil Lucifer himself is back in this adventure.

This time it is nice to see that Philip knows what he is doing even though he has no idea about the same. His character arc is continued from the previous book and it develops more throughout the story. Satina again is a playful companian. The kids have their innocent moments. Then again, the enormity of what they’re doing is not downplayed.

The book ventures into further unexplored parts of Hell making the world building even more astounding. The only thing you could ask more for is an epic climax. The ending seems a bit short of the theatrics if you compare it with the first book. It does not make it any less entertaining. But the Devil’s Apprentice had a nicely wrapped up third act to which this one looks a bit ordinary.
Other than that, The Die of Death is a delight to read and the pages just go by like a breeze.

The Die of Death is a gripping and amazing fantasy if you’re already invested in the Great Devil War series. The story is definitely a few good hours of escape reading which is exactly what I was looking for. Even so, there is depth and life in the characters. So far, I am enjoying this series and won’t mind a re-read if I had enough time.