An Anonymous Girl | By Greer Hendricks and Sarah Pekkanen

An Anonymous Girl | By Greer Hendricks and Sarah Pekkanen 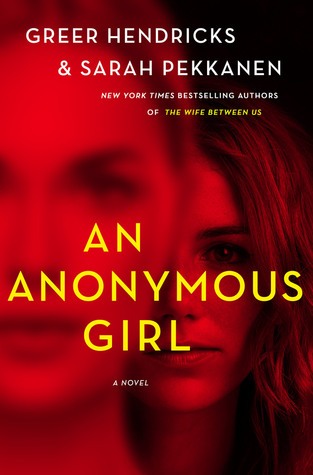 Categories: 2020, Thriller
Tags: #crimethriller, #psychologicalthriller, thriller
Authors: Greer Hendricks, Sarah Pekkanen
Genres: Crime Thriller, Pyschological Thriller
Publisher: St Martin's Griffin
Seeking women ages 18 - 32 to participate in a study on ethics and morality. Generous compensation. Anonymity guaranteed. When Jessica Farris signs up for a psychology study conducted by the mysterious Dr. Shields, she thinks all she’ll have to do is answer a few questions, collect her money, and leave. But as the questions grow more and more intense and invasive and the sessions become outings where Jess is told what to wear and how to act, she begins to feel as though Dr. Shields may know what she’s thinking…and what she’s hiding. As Jess’s paranoia grows, it becomes clear that she can no longer trust what in her life is real, and what is one of Dr. Shields’ manipulative experiments. Caught in a web of deceit and jealousy, Jess quickly learns that some obsessions can be deadly.  ( Goodreads )

An Anonymous Girl is a story about two women, one a psychologist and the other a subject. Naturally the narrative alternates between the therapist and the subject in each chapter. This gives us a better picture of who they are and what they want. At first, the abrupt shift in the narration seems a little confusing but once you figure out who is talking it becomes much easier.

The whole plot is divided into three parts. Each part moves at a different pace. The first part is slow and detailed but holds your interest. The second part is a bit descriptive. Sometimes it is necessary to reveal the characters and their nature subtly by their actions instead of just relying on the narrator.    The third part of the book is definitely a nail biting suspense that keeps you on your toes

Two pivotal characters are the pillars of this story – Dr. Shields and Jessica. Both of them belong to completely different backgrounds. Yet there is a similarity between them. If you want to draw a reference, it is more like Sansa and Cerisei in the Game of Thrones series. There is this whole cat and mouse chase throughout the story. Only this chase isn’t physical. The mind is the weapon here. Each one is trying to figure out the other.

The psychological experiment that Dr. Shields is conducting with Subject 52 is the main conflict of the book. There are other characters around them who bear the consequences of this experiment as well. Noah and Lizzie deserve more time than what is given to them. However, the central focus of the book is Jess and Dr. Shields. It is unfair if other characters are too involved. On that account, the story never loses its focus and reaches the desired goal of providing a thrilling experience to the reader. A strong epilogue would have made this a 5/5.

Going into the book, that had mixed reviews in general, you can never tell whether it is for you or not. There are some aspects of it that people might not enjoy. One can see why the response is so polar. Either you love it or hate it. The whole mental manipulation can be upsetting to many people. In a recent review, I mentioned a book using mental health as a plot device and not in a good way. But here, it is bordering  on the idea for the sake of fiction which is acceptable. If you are on board with that theme, then you’re in for  a gripping psychological thriller.