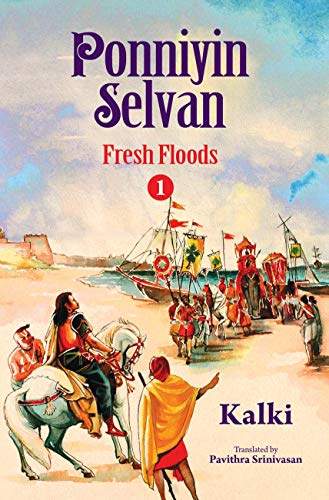 Ponniyin Selvan , a work of literature that I have always heard mentioned in many Tamil references, be it movies or stories. Ever since I wanted to know what the story was but never quite got into it since I wasn’t too fluent in reading Tamil. Especially literary fiction that was composed in the 1950s. However, with a Maniratnam movie coming this month based on the books, I had to read it. So, I grabbed an English translation by Pavithra Srinivasan. A few pages in and I wanted to know how the work sounded in Tamil. So, I found an elaborate audiobook of the original, with multiple cast and singers and music and listened to it simultaneously.

Ponniyin Selvan was first written as a recurring series in a magazine. Perhaps it is one of the reasons that the story takes its sweet time to breathe and lure us into an era of long-lost glory. The book is rich with songs, metaphors and tales of valour and heroism. It is easy to get lost in the ocean of these larger-than-life characters and think that you are reading a fantasy novel. But then, there comes the mention of a structure or a temple that is very real and still standing in all its glory. All of a sudden, you are reminded that this is indeed based on actual history. The kings, queens and warrior princesses mentioned were real people accompanied by a few fictional characters, of course.

The plot, however, is a brilliantly fictionalised version of how the Chozha (Or Chola) dynasty came under the rule of its greatest emperors. The conspiracies, alliances and a myriad of intriguing characters made this a real page-turner.

As I mentioned before, Ponniyin Selvan is the story of kings, queens and warrior princes and princesses. However, the central character Vandhiyathevan is none of them. He has no land to rule, no people to lord over. It is through his eyes that we travel this realm. A clever choice for a protagonist since it is easier to root for him. He is witty, charming, cunning and does it all with style.

Then there is the mysterious Aalwarkkadian, the dangerously beautiful Pazhavur Queen, the badass political mastermind Kundhavai, the ailing Emperor and many more characters who are quite memorable and part of an intricate royal web.

As I said, myriad characters and yet at the end of the book there is no confusion as to who is what. That is brilliant writing and you immediately want to read the next one. The conflict of the book is pretty straightforward. Who will take the reins after the ailing Emperor?

However, the road to that answer is long and filled with conspiracies. The only misgiving of the book is that it does not have a conclusive plot as a standalone. Of course, there is a hero, and he sets out on a task. But the book ended randomly, which is understandable given that this was a long volume meant for a magazine.

If you are in the mood for an epic saga filled with beautiful art, culture and literature, go for this one. Ponniyin Selvan tells a complicated tale of history with a deeply layered fictional plot. It reminisces the long-lost glory of the Cholas in Tamil Nadu and their powerful reign.