The Wedding Crasher | By Mia Sosa 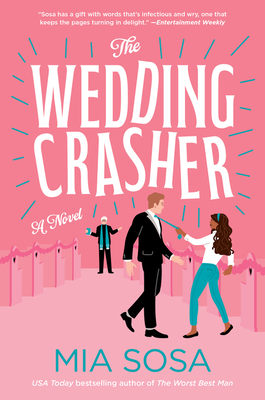 Ever since I read and loved The Worst Best Man, I have been waiting to read this one. This being the second novel, there is a certain expectation that comes along. For the most part, the book didn’t disappoint. Solange and Dean capture your attention from the get-go and you are rooting for them since then. Also, I am glad they are calling out the fake dating trope itself.

Fake dating is kind of the most outlandish tropes in rom-com. However, if done right, it can get us into that suspend your disbelief state, and be a part of an enjoyable story. The Wedding Crasher brings the perfect recipe for the same.

Personally, I live in a country where the marriage of convenience is still the norm. Most arranged marriages start as a potential relationship between two agreeable families and if you’re lucky enough, love will find its way, too. All of this is to say that I get Dean’s pov. I can see where he is coming from and what his apprehensions are. His need for stability isn’t completely unfounded.

However, the same cannot be said for Solange. Sure, she has this arc that kind of begins with her being somewhat flighty. But it doesn’t land quite well because Solange is almost a flawless character. She didn’t have much to recover or redeem herself because her mistakes were barely an inconvenience.

It doesn’t make the overall plot any less interesting. But the ambition of second-generation immigrants and their fears were already addressed in the first book, which continues here by extension. Other than that it didn’t have any other wow factor that would make it surpass the first one.

The Wedding Crasher is a fun, contemporary rom-com with quite an engaging set of ensemble characters. I could see myself reading this one again and having a good old time. So, if you have read the first one and are curious about this one, I would say, pick it up. You won’t regret it.