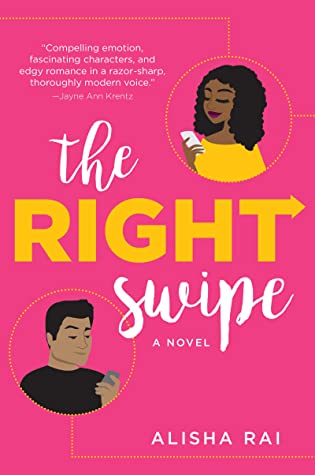 Categories: 2022, Book Discussions, Book Reviews, Chick-lits, Contemporary, Contemporary Romance, Romance, Women's fiction
Series: Modern Love
Publisher: Avon
Alisha Rai returns with the first book in her sizzling new Modern Love series, in which two rival dating app creators find themselves at odds in the boardroom but in sync in the bedroom. Rhiannon Hunter may have revolutionized romance in the digital world, but in real life she only swipes right on her career—and the occasional hookup. The cynical dating app creator controls her love life with a few key rules: - Nude pics are by…

The Right Swipe is the first book in the Modern Love series. True to its name, the story goes through the ins and outs of modern-day dating. The narrative shifts between Rhiannon and Samson, the main protagonists. Since the two are really fleshed out characters, they keep you hooked on the story.

The plot is straightforward. There are no surprises. You sign up for a fun romance read, and that is exactly what you get.

Rhi and Samson are both layered characters. It is one of the things that keep you interested in the story. They are both well-rounded individuals with flaws of their own. The romance is the central element of the story. But there are other facets to these characters which make them real and three dimensional.

Despite having such strong main characters and equally strong supporting characters, the conflict in the book wasn’t that satisfying. Of course, it deals with delicate issues. But the final conflict between the main characters was resolved with little effort.

Overall, The Right Swipe is a romantic comedy that you can pick and read quickly on the weekend. It is stylish, modern and yet touches on a few serious issues. That alone would make it a good pick for book clubs. If you’re a fan of light rom-coms with presumably powerful characters, go for it.