The Spring Girls | By Anna Todd

The Spring Girls | By Anna Todd 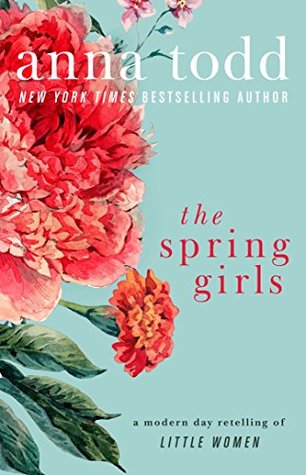 Categories: Blogmas 2018, Book Discussions, Contemporary, Women's fiction
Tags: classicretelling, YAcontemporary
Author: Anna Todd
Genre: Contemporary fiction
Publisher: Gallery Books
The Spring Girls is a modern day retelling of the classic “Little Women” by Louisa May Alcott. In this story - Meg, Jo, Beth and Amy – the Spring girls live in a military base in New Orleans along with their mother Meredith while their father is posted in Iraq. It is a coming of age story in the changing and challenging twenty first century.

Anna Todd, who is also the author of the After series, is an avid reader herself. Her “After” series is being adapted into a movie. She started writing on Wattpadd and later on got her books published in different languages.

The Spring Girls is a modern day retelling of the classic “Little Women” by Louisa May Alcott. In this story – Meg, Jo, Beth and Amy – the Spring girls live in a military base in New Orleans along with their mother Meredith while their father is posted in Iraq. It is a coming of age story in the changing and challenging twenty first century.

I love the classic Little Women and was curious to find out how this story will play out in the twenty first century set up. I listened to the audiobook in Scribd, all prepared to fall in love with this modern version. But as I finished the last chapter, I have mixed feelings about the book.

This is a multiple narrative book. Meg, Jo, Beth and Meredith are the main characters whose perspectives we get to see. As I have stated in my previous reviews, I love multiple narratives. It gives more personality to each characters and background to the way they react to the specific events happening around them.

While the classic had a third person’s eye on the March family, Anna Todd’s Spring Girls makes us a spectator to each person’s worldview. I liked how Beth was more spirited in the modern version. It is quite possible that someone who is so quiet on the outside had a lot of things going inside their head. Overall, I enjoyed the narrative and the voice the author gave to each of them.

However, I wasn’t a great fan of the plot. This could have been just an adequate coming of age story if it didn’t say that it was a retelling of the classic. That is a huge task to accomplish and somewhere I didn’t find the book hitting that mark. Little Women represented a culture, a demographic of women in the United States who wanted to be perceived as more than just props in the society. They worked hard, had their own expectations from life and there was a complete journey that we witnessed by the end of the book. Whereas here, what we have is your typical teenage girls with their own drama. I was hoping for the story to move on but it focused more on the initial chapters of the classic and decided to stick with that.

I sincerely hope there is a sequel to this because this book didn’t even cover half of the Spring girl’s life.

One thing that I liked was the original spirit of the Spring girls remaining pretty much intact.

One of the biggest disappointments for me was how underdeveloped the characters of Meredith and old Mr. Lawrence were. Meredith here was absent and lost in her own world which I somehow find a downfall than the strong and spirited 19th century Marmee. Mr Lawrence gifting the piano to Beth was confined to a single sentence which broke my heart. It is those tender moments that made Little Women what it was.

The Spring girls might have their basic instincts intact from their classic counterparts. Apart from that the Spring girls and the March girls were conflicting in different ways. Meg in the March family was the ideal representation of how society expected a woman should be. She might have been materialistic but she had this grounded expectation from life and in the end she chooses love over material comforts. The Spring version of Meg is a disgraced prom queen who is entwined in a love triangle. Now, do I like this version? I’m conflicted to be honest. At first, I didn’t understand why the drama was being dragged beyond a certain level. And then I saw how true that was. Earlier a woman like Meg could simply be happy with her choice and get on with her life. But today, wanting a simple thing such as a stable relationship isn’t something that comes to you very easily. It comes with a lot more complications and drama. On that level, I respect that. However by the end of the book, I felt it was being stretched a little too much.

Jo started out to be someone promising and identical to her March version. However, we never got to see what her chances in the outside world were. Jo March eventually decided settle down in her hometown and lead a quiet and content life instead of the adventures she craved. But today’s Jo Spring didn’t have to settle for that. And while it kind takes away the unique element, I am still glad her relationship with Laurie is acknowledged by Jo herself.

When it comes to that, we never get to know what choice she would make and how she identifies herself. Jo Spring is currently trying to hold both her worlds together and it could go anywhere or so I feel. Beth however turned out to be better in this version because we were able to see her version of things. However none of her major conflicts were addressed here which is why I am thinking there might be a sequel. Amy’s innocence taken away she is quite a brat in the Spring family. She is never thankful and a character easily disliked despite what Meg has to say about her situation.

This review turned out to be longer than what I had expected. The reason is I am conflicted about the book. Some parts, I enjoyed and was amazed as to how the book brought it to twenty first century. If there is a sequel to this book, I would definitely read it.

Then again, there were certain parts I wish were not in the book at all. And if it is a standalone, then I would say it reduced the coming of age story into a teen drama. To me, this was a one-time read and a somewhat alright retelling of the classic.

If you are someone who enjoy this as an independent book, go for it and let me know how you feel about this.

The Spring Girls by Anna Todd
My rating: 3 of 5 stars