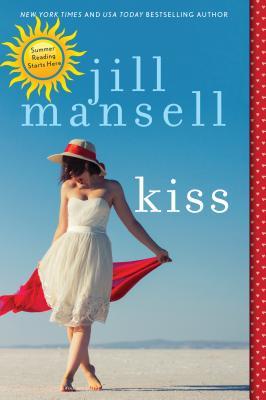 When aspiring musician Izzy is knocked off her motorbike, she doesn’t just lose her dignity–she loses both long-term boyfriends, her job, and her beautiful apartment. Gina, who caused the accident, has more important things to worry about: her husband has just deserted her for his pregnant mistress. Why should she care about Izzy? Yet somehow, Gina finds herself opening her home to Izzy and her spirited teenage daughter.

It’s there that Izzy meets Gina’s oldest friend, heart-stoppingly handsome Sam, whose lingering kiss is almost impossible to ignore. But there are just a few obstacles between that first kiss and the happily ever after that has always eluded her…

Jill Mansel is one of my go to author when it comes to chic-lit romance books. Some I have enjoyed a lot. Which is why I was really thrilled to read Kiss. It didn’t disappoint me. The narrative was entertaining enough. There were some fun moments here and there.

However, the plot was questionable. Even though it had the usual Jill Mansel tropes, none of them offered enough scope of depth. After a point, the story felt as if it was being dragged on unnecessarily. And the latter half of the book was a bit unrealistic.

While the book had some interesting characters, the way they were developed made them hardly relatable. Most of the characters were uncharacteristically selfish and had their own interests in mind. And by the time they showed some consideration to other people, it was too little too little. Also, some of the choices the characters made and even justified was incomprehensible for me.

Maybe it is just me. I am not the target audience for this particular book. And none of the characters were relatable to me in any way. The writing was engaging and that is what kept me going. Apart from that, it lacked heart and depth. Which is what I felt.

Even if you ignore the questionable morals of certain characters, there was one conflict in particular which made me cringe while reading. Underage romance no matter how you present it, cannot be shipped in anyway. And the way it was brought to culmination was not satisfactory as well.

This wasn’t exactly a bad book. I finished it. It had its good moments. But you can’t love them all. Unfortunately, this is not the Kiss, I am yearning for.

About the Author
Get your book here : Amazon_US Amazon_IN Book Depository