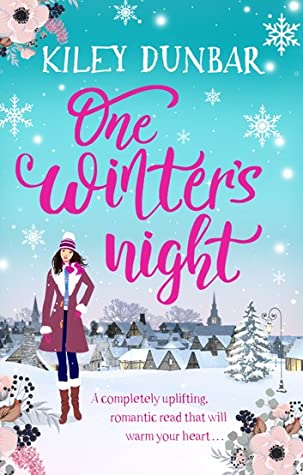 Categories: 2021, Book Discussions, Book Reviews, Chick-lits, Contemporary, Romance, Women's fiction
Tags: chiclit, contemporaryfiction, holidayreads, holidayromance, romancereads, womensfiction
Author: Kiley Dunbar
Genres: Chic-lit, Contemporary fiction, Romance, Women's fictions
Series: Kelsey Anderson
Publisher: Hera Books
When best friend Mirren Imrie moves down from Scotland, Kelsey is delighted to have her friend at her side – and as the nights turn colder, Mirren throws herself into dating, until she finds herself growing closer to sexy journalist, Adrian Armadale. But when Mirren uncovers a long-buried scandal while working at the local newspaper, her big scoop might throw Kelsey’s – and Jonathan’s – life upside down. Will she choose her career over her…

One Winter’s Night by Kiley Dunbar is a sequel to One Summer’s Night. Now, I haven’t read the first book but the author assures that this book is a standalone in itself. On that note, I decided to go on reading the second. The book starts slow and remains so for a while. However, towards the end it picks up pace and things move faster. It could have been a bit more evenly paced as a lot of the important stuff felt like they were covered hastily.

Even so, the story remained consistent keeping its focus on Kelsey and Mirren even though it was easy to get distracted. The plot was more about their personal growth than this being a Christmas read.

Kelsey and Mirren both had a coming of age arc in the book which I enjoyed. But it takes a lot of patience to get there. It was fine that the characters blamed themselves for most of the things gone wrong in their lives, but it never bodes well when they continue to do so towards three-forth of the story.

Especially, when one of your main character is slut shaming herself repeatedly, it became it a bit tiresome to get through. I realize that people often wallow with things that are not their fault. But all that loathing and blaming would not stop, if someone mansplained it to you. That’s where I took issue with it.

The romance was very Shakespearean in its longing and pining. I enjoyed the quotes at the start of each chapter. However, the long distance relationship between Kelsey and Jonathan was a bit hard to ship for, with me having no backstory about their relationship without reading the first book. But I acknowledge the chemistry when the characters were together.

The ensemble cast however, looks colorful and brings life to the story, Blythe in particular. Perhaps, she was my favorite character of the book.

Overall, it was a one time read for me. I enjoyed the Shakespearean vibe throughout the writing and the Stratford charm. There wasn’t a lot of focus on Christmas but it sure makes up for a cozy winter read.