I love to write while listening to soundtracks. It is an act that I discovered on a random occurrence, but an aspect of my writing journey that has had a great impact on me. The first time I did it was on a whim, I somehow found a 75 minute relaxing Nintendo music playlist and went to work. Within the next few minutes I was hard at work with a newfound sense of focus.

I mostly write at home where the only sound around me was the stomping of feet from the people I live with, and the occasional whoosh of a car that passes by the house. Not the best sounds to be inspired by.  When I plug in my headphones my atmosphere changes, making it so the stomping of feet outside my window is replaced by a crescendo of beautifully composed music.

When I put on a soundtrack, I find myself getting lost in the story. This level of focus is hard for me to achieve while I am distracted by the outside world, but having a soundtrack blocks it out, and transports me into the worlds that I am creating. Trapping me in a trance that I emerge from only when my timer goes off.

Listening to soundtracks while I write keeps me inspired. When I listen to something that originates from a beloved movie or television series it pushes the idea in my head that I am just as capable of creating a great story as the one that I enjoyed.

A great part about music is finding something new is just as good as as good as hearing something familiar. Doing so leads to branching out and discovering unfamiliar music, curating, and expanding my music tastes while I create my art.

Writing to soundtracks aids in the creating mood of whatever scene that I am attempting to create. While I write without them the ideas of what my setting and characters is quite vague within my head. When I use a soundtrack it strengthens the visual picture. It is much easier to craft an intense battle scene while listening to epic music, and having a downbeat piano soundtrack playing while I write a character death reminds me to prioritize emotion. 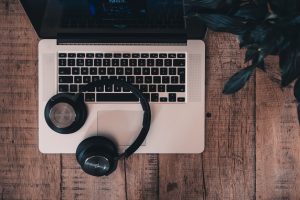 There is an almost endless level of variety of what can be listened to. If you are writing a scene with tension, the music from horror movies are your friend, and if you need something on a grand scale there are countless fantasy soundtracks on your side. It is much easier to imagine my characters running away from an enemy while music highlighting chaos lures in the background.  There is a soundtrack for every writing situation, and thanks to services like Spotify there are many premade playlists at your disposal.

Writing to soundtracks is amazing, and adds to the experience of writing. If you are a writer looking to breath fresh life into your writing experience check out some soundtracks, and get started.

This guest post was written by Novel Cave. Novel Cave is a book blog dedicated to reviews, recommendations, news, and more. Accessible to both book worms, and new readers.